Corporation minute books are useful for those who can trace their ancestry to the city and also give a useful insight into the running of an early embryonic council. The minutes are a gold mine for the local historian and shine a light into the development of the city over a 220 year period.

Each minute book begins with the date of the meeting of the Common Council and a list of those members in attendance, the aldermen and burgesses of the city.  In the late 17th and 18th centuries, the city’s business life consisted of merchants and craftsmen such as butchers and bakers, tailors and shoemakers, smiths and saddlers, joiners and coopers. The minutes contain the names of many merchants and craftsmen who were granted freemen status. The jurisdiction and liberties of Lononderry city extended 3 miles in every direction (including the River Foyle east bank). Liberties meant the freedom to exercise one's craft or trade. No one could could carry out bisiness in the liberties unless he was a freeman.

In the 17th and 18th centuries, in a city dominated by merchants, shopkeepers and craftemen, only Freemen of the City were entitles to conduct business, own property and recieve protection within the walled city. By the mid-eighteenth century the Freemen were semi-heriditary and was a closely controlled group consisting of those entitled by birth, apprenticeship, marriage, by buying or those granted it by a favour (some of of those made freemen in this period did not reside in the city).

Examples from the records 1794-1832 (the dates given are the date of the council meetings). These are only selective extracts to give an example of what the minutes contain.

KEEP IT IN THE FAMILY!

21 April 1794 - Ordered that the Rev John Story son in law to Alexander Young, James Stirling son in law to John Knox, John Barclay son in law to Samuel Curry, Esq., William Coningham son to Dickson Coningham, Esq., each and every one of them be admited freeman and excused spoon and bucket.

27 May 1794 - charities granted by the corporation - a list of 115 named individuals, mostly widows

30 Dec 1797 - The freedom of the city was also granted to Londonderry Cavalry naming about twenty men (including John Kinkead).

23 August 1803 - Ordered that the city be lighted with 180 lamps and that the mayor regulate the placing of the same and times of lighting.

2 Nov 1803 - odered that Daniel McDaid be paid £20 for his trouble in attending the lighting of the lamps, last year including a balance of £7 which he is to paid.

THE SQUIRES & THE LECKY FAMILY

13 Feb 1809 - a statement from Thomas Lecky and Alexander Lecky 3 Feb 1803 renouncing their family lease given to their ancestor Alexander Lecky in 1696 by the Irish Society.

18 June 1812 - ordered that Samuel Hunter from Newtown Limavady be appointed coroner for this county.

BONDING WITH THE CORPORATION 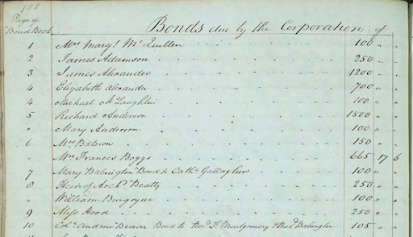 FOR WHOM THE BELLS TOLL

THOU DOST PROTEST TOO MUCH

2 Nov 1825 (page 198) letter signed by 168 tradesmen & citizens of the city complaining to the corporation (great source of names).

7 April 1831 (between pages 295 and 296) a detailed typed page of Corporation accounts - lots of names and salaries of Corporation employees. John Dysart the mayor had an annual salary of £300.

NOTE: The corporation minutes can be viewed and searched at  NIDirect.gov.uk

CoTyroneIreland.com uses cookies to: analyze usage so that we can improve our service; allow our advertisers to provide content of specific interest to each user; monitor usage of our service; detect, prevent and address technical issues; allow you to participate in interactive features of our service when you choose to do so and to provide and maintain our service.

Google uses cookies to help serve the ads it displays on the websites of its partners, such as websites displaying Google ads or participating in Google certified ad networks. When users visit a Google partner's website, a cookie may be dropped on that end user's browser.